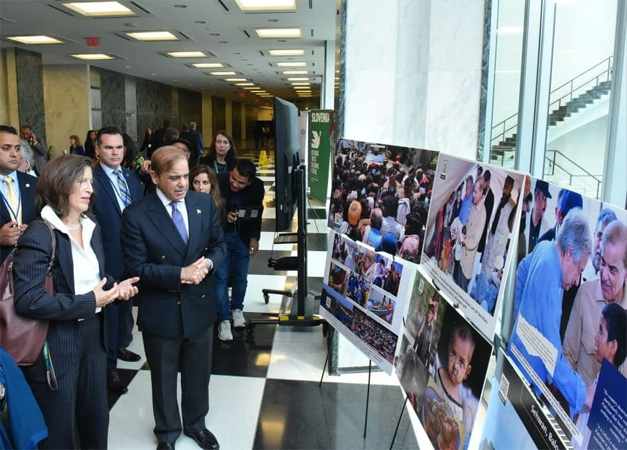 Prime Minister Shehbaz Sharif makes his debut on world stage when addresses the 77session of UN General Assembly on Friday in which he is set to highlight the massive devastation left behind by the deadly climate-induced floods, and appeal for international help to deal with the catastrophe.

The Pakistani leader is the 12th speaker in the 193-member Assembly’s high-level debate on its 4th day in which some 140 world leader are participating, It is the first in-person session of the Assembly following the COVID-19 pandemic.

During his series of meetings with his counterparts from around the world, Prime Minister Sharif has been briefing them on the floods that have inundated one-third of Pakistan, inflicting huge damage to human lives, infrastructure, livestock and crops. “Pakistan is passing through difficult times and the havoc wreaked by floods, which is obvious before the world, needs serious attention,” he said in his video statement.

Prime Minister Shehbaz Sharif Thursday met Bill Gates, co-chair of the Bill & Melinda Gates Foundation, to discuss the recent devastation caused by flooding in Pakistan, which has displaced 33 million people, as well as polio eradication and primary health services in the country. The prime minister updated Mr Gates on the impact of the floods on the people’s lives and livelihoods, and public health in Pakistan, and the work the government was urgently undertaking to alleviate their sufferings.

Bill Gates expressed his concern for the people of Pakistan following the floods and reiterated the Foundation’s continuous support and partnership with Pakistan during the challenging time. He affirmed that the Gates Foundation would continue its current support including the disaster relief efforts in flood-affected areas of Balochistan and Sindh.

The prime minister and Mr Gates discussed the impact of the floods on immunization and maternal health services, and polio eradication in particular.

The prime minister acknowledged the need to prioritize maternal and newborn care in the flood-affected areas and thanked Mr Gates for the Foundation’s support to Pakistan’s relief efforts thus far.

On the polio eradication, the prime minister and Mr Gates discussed that eradication efforts were facing a challenging situation because of the floods, especially after a recent rise in the number of wild polio cases.

The prime minister reaffirmed the government’s resolve to pursue the campaign relentlessly. They agreed to continue their collaboration with polio partners to urgently reach vulnerable children with polio vaccines through the remainder of 2022 and prevent the disease re-establishing itself in Pakistan’s major cities.

Mr Gates thanked the prime minister for his continued prioritization of the polio eradication.

They also spoke of how the polio programme was using its robust infrastructure to support the acute phase of the flood response, including deploying its surveillance system to monitor for malaria, dengue, and water-borne disease outbreaks as well as helping to deliver other life-saving vaccines to the children.

The polio programme, with funding from the Bill & Melinda Gates Foundation, is currently conducting 1,200 health camps in the worst flood-affected districts across Pakistan.

They exchanged views on the need to continue their close partnership together to ensure Pakistan make progress on health and development, including for enhancing agricultural resilience and rebuilding sustainable infrastructure that can withstand future climate shocks.

Prime Minister Shehbaz Sharif on Thursday expressed his gratitude to the United States President Joe Biden for highlighting the need for urgent action in the wake of massive floods in Pakistan.”Thank you President Joe Biden for highlighting the plight of the flood victims in Pakistan and urging the world for an immediate response, as my country is facing the ravages of unprecedented floods,” he posted on his Twitter handle.The prime minister stressed that the calls of stranded women and children for help need to be heeded at international level.

In another tweet, he said, on the second day of UN General Assembly, his discussions with top officials of International Monetary Fund (IMF) and World Bank focused on making resources available within the country’s existing programmes for post-flood reconstruction.

“In my other meetings with world leaders, we discussed floods, climate change and rehabilitation of flood victims,” he said.

Prime Minister Shehbaz Sharif on Thursday acknowledged the “empathy and compassion” of United Nations special envoy Angelina Jolie, who is currently on a visit to Pakistan in solidarity with the flood-affected people.

“Pakistan thanks Angelina Jolie, a special UN envoy, and other unsung heroes for becoming the voice of millions of people whose lives and livelihoods have been destroyed by raging floodwater,” he said in a tweet.

The prime minister said, “We will forever remember their empathy and compassion for suffering humanity.”

During her visit to the National Flood Response Coordination Centre (NFRCC) late Wednesday, Jolie said that she has never seen anything like this disaster before.

Besides Jolie, renowned Islamic scholar Mufti Menk and Turkish actor Celal Al also visited the flood-affected areas of Pakistan and extended assistance to the families who suffered the devastation.

According to the Media Wing of the Prime Minister Office, the meeting took place on the sidelines of the 77th session of the United Nations General Assembly.

In a tweet the EU President said, “I conveyed to Prime Minister of Pakistan @CMShehbaz my personal condolences for the victims of the terrible floods. The @EU_Commission is with you. We will come forward with new humanitarian aid in the coming weeks, to support the people of Pakistan.”