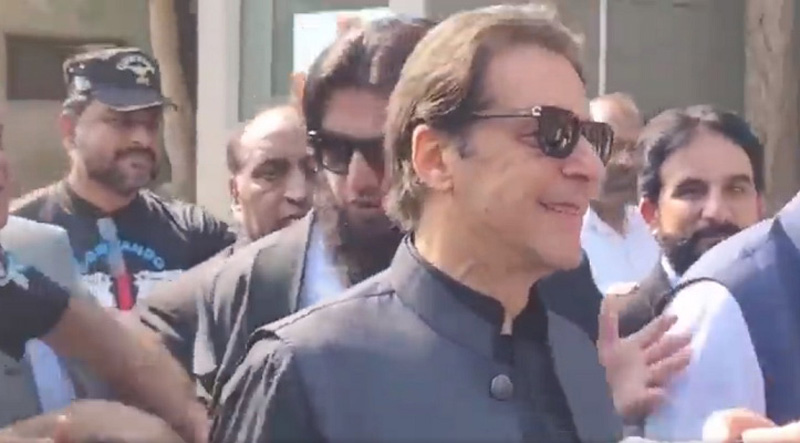 Former prime minister Imran Khan has said that he doesn’t want to fight with judiciary of the country and that his real struggle is against mafias.

The comments by PTI chairman came as Islamabad High Court (IHC) Thursday postponed his indictment till October 3 in contempt of court case after he verbally apologized on his threatening remarks for a woman judge. “I am currently fighting for real freedom and my war is against mafias. I don’t want to fight Pakistan’s judiciary,” Imran Khan told reporters after appearing in the court. A journalist asked if he would become more dangerous after apologizing. “You know more about these things,” the PTI chief said in response.

Earlier, the court directed Imran Khan to submit an affidavit regarding his statement and said that further case would be proceeded in light of that (affidavit).

The order went on that the PTI chief has promised never to do anything in the future that would hurt the dignity of the judiciary and especially the lower judiciary. In view of Imran’s response, the court said that it was “satisfied with the apology rendered by the respondent”. “Let him file an affidavit for consideration of this Court before the next date fixed,” the IHC added.

Earlier, as the hearing began, Imran Khan arrived at the rostrum and said that he was ready to visit the woman judge Zeba Chaudhry to clarify his position and extend apology as he had no intention to threat the additional session judge. He assured the bench that he would not do such act again in the future.

The PTI chief said that he always talk about rule of law and had been struggling for 26 years for independence of judiciary in the country. If the court thought he had crosses the line then he wanted to explain that he had not given the threatening remarks intentionally instead he had talked about a legal action against the said judge in public rally, Imran Khan added.

He said that he had realized the seriousness of the matter as the case proceeding moved forward. Chief Justice Athar Minallah remarked that the court appreciated the act of PTI chief for withdrawing his words about the judge. He said that the court was not framing charges against him. The chief justice remarked that they did not encourage contempt of court cases but the way PTI chief gave remarks in public gathering was a serious matter. The court instructed Imran Khan to submit affidavit regarding his apology and adjourned hearing of the case. The IHC CJ said that the court would record the PTI chief’s statement and told Imran to submit an affidavit. “Submit an affidavit detailing what you have said,” the IHC CJ said. “It is your personal decision as to visit the judge in person,” the IHC bench said. “If you have realised [your] mistake and ready to apologise for it […] that is enough,” the court remarked.

The hearing was subsequently adjourned till October 3 with the court directing the PTI chief to submit an affidavit within a week.

Meanwhile, Imran Khan has said that his so-called “real freedom” movement against the elite capture and for independent foreign policy was the largest in the country’s history after Pakistan Movement.

“No one gives freedom easily. One has to render sacrifices and wage jihad in order to achieve freedom. Those who have occupied this system are exploiting this country,” he said while addressing a ceremony in Islamabad on Thursday.

The former premier, without naming anyone, said those elements who have amassed billions of rupees by occupying the resources of the country will not give freedom easily. “This movement for Haqeqi Azadi [real freedom] is the largest movement in the country’s history after our forefathers crated this country through struggle,” he remarked.

He asked the party members to go door to door and explain to the masses the objective of his “real freedom movement”.

The PTI leader said the imported government has pushed the people into the sea of inflation while rulers were busy amending laws to save themselves from accountability. “The value of rupee is declining and inflation is rising. They did not come to power to serve masses but to save their loot and rule country at the whims of their foreign masters,” he added.

Imran Khan while reacting to the threat of Minister for Interior warned Rana Sanaullah that he wouldn’t find place in Islamabad to hide because this time they [PTI] will come fully prepared. He warned Rana Sanaullah that he would not find a place to hide in Islamabad if he adopts the same brutality and violence against peaceful marchers at this time. The PTI chairman said that a coward person cannot become a great leader, adding that a person, who can control and end his fear, can become a big leader.